Ask our experts: What we’ve learned in the first year of the ELD Mandate 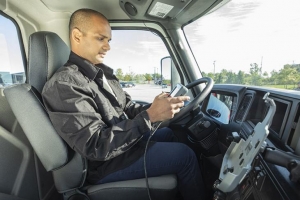 With the one-year anniversary of the U.S.’s Electronic Logging Device (ELD) Mandate falling on Dec. 18, 2018, trucking companies are either looking back at the rule’s impact or looking ahead to ensure that their temporarily exempt devices are ELD-certified by December of 2019.

To get some perspective on the ELD law heading into year two, we checked in with Omnitracs Vice President of Regulatory Affairs Tom Cuthbertson to hear his views.

How smooth has the adoption been?
Adoption is happening, but it’s been a marathon, not a sprint. Fleets that put in AOBRDs (Automatic On-Board Recording Devices) before the compliance date are very slow to migrate over to ELDs. The majority of them are still running AOBRDs. We’re counseling people to plan their migrations ahead of time. We went from a three-page regulation to a 120-page technical spec, which can be understandably daunting but shouldn’t delay the migration process.

Is there a significant number of companies that haven’t changed over?
Yes, there are. I think you’ll start to see people migrate over right after the first of the year because they know they’ll only have 12 months left at that point. Freight is seasonal. When we get through the holidays into January and February, you’ll see more companies shifting over.

What is the biggest impact of the rule?
I think it’s the learning curve of going from paper to an electronic device. People talk about productivity – that they could lose four to five percent implementing ELDs. That may be true in the beginning when you’re learning these things. However, I’ve heard from many other carriers that they’re picking up at least that amount of productivity because of better planning, better understanding of the availability of hours per load, and better load assignments for drivers. When I talk to a driver after they’ve used ELDs for a period of time, the feedback is always the same — they don’t want to drive without them. They’re happy they have them and they feel like their productivity goals are being met. Some drivers feel they’re getting drive time back because it’s minute to minute versus the 15-minute increments on the paper. With the ELDs, you know the driving time availability and the duty time availability, which is extremely beneficial.

Are carriers getting the benefits they were expecting?
Carriers that adopted AOBRDs a while ago may not be seeing a difference of getting information from fuel management and having better dispatch because they’re getting similar information from what they had before. However, there are a lot of owner/operators that can take better advantage of it. Small fleets can take advantage of having a device hooked to the engine. This allows them to see if they’re having engine faults that can degrade the engine or have a costly repair like an engine rebuild. If they can prevent service failures on their loads, they can prevent costly maintenance and better manage their fuel.

How has enforcement at roadside?
While training for enforcement started in 2017, carriers were not fully ready for what drivers had to communicate at roadside. There was confusion between drivers and enforcement about whether they had an ELD or an AOBRD. As long as a driver installed an AOBRD before the compliance date in 2017, they could use that AOBRD for two years. This means that there are devices that were registered that one could run as an AOBRD but a lot of inspection violations were being handed out due to communication issues between enforcement and the driver.

The associations and Omnitracs have done quite a bit of communication reminding drivers what they have to say to enforcement at roadside. People for a long time were just indiscriminately thinking ‘I have an ELD.’ It may be registered, but you’re still running AOBRD software. There was a significant amount of confusion out there.

Is the confusion starting to subside?
Yes, but there’s still a lot of confusion out there. After December 2017, you had to have an AOBRD or an ELD. They weren’t doing hard enforcement, but they were still handing out inspection violations for not having a device and didn’t count against CSA. When April 1 came around, they were allowed to put them out of service if drivers didn’t have an AOBRD or an ELD in the vehicle. And in April there were probably between 1,200 to 1,300 inspection violations handed out for no AOBRD or ELD.

Here’s one positive piece of news. Form and Manner violations — essentially not filling out the right information — dropped like a rock with ELDs. Out-of-Service violations also went way down. When a vehicle is put out of service, it’s put out of service for 10 hours. That’s created a significant incentive for companies to comply. Because all the electronic data has been recorded with an ELD, those type of violations have taken a significant drop.

What kinds of changes will we see in year two?
I don’t think we’ll really see many changes. The biggest impact will be the adoption of ELDs by people that have lagged behind and the training they’ll undergo to move over to ELDs. They’ll become more aware of new rules — like now drive starts at 5 mph. Somebody may have moved the truck to refuel at the end of the night, and hasn’t logged in. If it goes at 5 mph, it’s another unassigned drive. When you don’t have a login, there’s a whole administrative process that has to go through. As people adopt and adjust, they’re going to have to put in new processes and training.

To learn about Omnitracs' ELD solutions, visit this page or contact us.