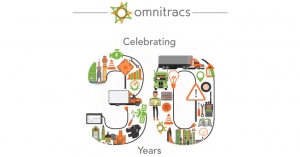 It’s been 30 years since a then-unknown startup called Qualcomm took an early computer-based tracking system and married it to CDMA, a brand-new communications network of their own invention, to create a mobile communications technology with the aim of locating and messaging fleets of long-haul trucks. They called this new mobile truck tracking and communication system OmniTRACS.

Back in the late 1980s and much of the 1990s, San Diego-based Qualcomm grew much more famous for its development of cellphone, chipsets, and processing technologies for the mobile communications networks on which the world now heavily depends. But OmniTRACS, which gradually morphed into the Omnitracs division of the company, was always at Qualcomm’s core, quietly leading the digital revolution in trucking and logistics.

Fast forward from 1988, and today we witness a sea change in both technology and trucking. Omnitracs, a pioneer of the industry, is now the leader among dozens of upstart fleet management companies flooding the market. We are leveraging our market position, and — with the help of our many customers who provide us with valuable feedback — push fleet management software technology to provide greater insight, productivity, safety, and driver satisfaction. Nearly every heavy commercial truck in the nation is required by law to carry advanced digital systems that track the vehicle’s location and the driver’s hours of service, but Omnitracs’ more advanced systems monitor everything from brake usage and internal engine performance to the positions of other vehicles surrounding the truck on the highways. Thirty years ago, hours of service and many of the government regulations that exist in trucking today were not yet introduced. Driver shortage and traffic were not the issues they are today but since 1988, improvements have been made to our infrastructure and driver and vehicle safety.

The pioneering software and technology developed by Omnitracs three decades ago now delivers value for the entire spectrum of long-haul operators, from hard working owner/operators to companies that dominate our highways with thousands of trucks in their fleets. Today, all operate more safely, productively, efficiently, and profitably thanks to Omnitracs’ innovation.

Important to the Omnitracs story is the story of a tech startup called RoadNET Systems that began working in 1983 on the first PC-based routing and scheduling software to streamline and optimize route planning and delivery. Roadnet Technologies, as it eventually became known, led the revolution in last mile delivery planning. Prior to the introduction of Roadnet software users had little to go on but their own intuition and the knowledge of veteran employees to determine the best local delivery or service route. Roadnet’s pioneering algorithms and technology gave companies engaged in daily local delivery, like food and beverage wholesalers, the ability to get more production out of each truck each day. A breakthrough for the industry, the technology also allowed companies to better meet individual customers’ needs for deliveries at specific times throughout the day.

In 2013, Vista Equity Partners acquired the Omnitracs division of Qualcomm, which in turn acquired Roadnet Technologies, as well as XRS in 2014. Before that, Qualcomm acquired load sharing and transportation management system provider Sylectus and predictive analytics company FleetRisk Advisors (which both came with Omnitracs in the Qualcomm carve out).

Besides the 2013-2014 blending of the original Omnitracs with Roadnet and the mobile trucking technologies company XRS (acquired in 2014), other major mileposts in Omnitracs’ history include:

Together, and with Omnitracs Mexico and Canada, the expanded Omnitracs now ranks as the industry’s largest and most comprehensive provider of fleet management technology.

Omnitracs is proud to have led the transportation industry every step of the way, along with our many client carriers and distribution companies. The industry’s technological evolution over the last 30 years has transformed one of the nation’s most important and complex industries into a model of data-driven sophistication. We now deliver advanced technology services to more than 12,000 customers operating well over one million trucks in more than 70 nations.

We know that the pace of change promises to be even more swift — and just as challenging — in the years immediately ahead. So, while we take a few moments now to celebrate 30 years of innovation at Omnitracs, we won’t be taking our foot off the gas pedal when it comes to innovation, creativity, and customer support. The road ahead is long, and we’re here to support you from the first mile to the last.