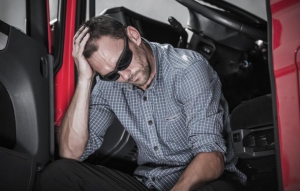 According to the National Highway Traffic Safety Administration (NHTSA), close to 10,000 deaths from alcohol-related crashes occur in the U.S. alone every year, adding up to about 27 deaths per day. The NHTSA runs its annual Drive Sober or Get Pulled Over campaign over Labor Day weekend, one of the most dangerous times to be on the road. This campaign started in 2004 to raise awareness, reduce impaired driving, and encourage responsible driving behavior across the country.

As we approach the holiday, state and local police officers, as well as federal and state trucking weight and safety officers, are cracking down on impaired drivers and enhancing enforcement efforts. As you head into the holiday weekend, here are some things to keep in mind.

One of the major concerns facing the transportation industry today is fleet safety. Unsafe driving behavior can result in heavy fines for fleets due to higher insurance premiums and fines for non-compliant users. Innovations such as voice-activated technology and in-cab videos are helping to prevent some accidents, but fleets must consider one of the biggest threats to their drivers: alcohol.

Today, truckers, dispatchers, and trucking managers can all be penalized if a driver does not adhere to the strict regulations around the consumption of alcohol while on duty. According to the Federal Motor Safety Carrier Administration (FMSCA), truckers cannot operate a vehicle within four hours of drinking or keep alcohol in their cabs. Beyond driving, they must remain sober while loading or unloading a vehicle, repairing a disabled vehicle, or waiting at a terminal or facility.

Under national law, drivers with a commercial driver’s license are only legally allowed to have a blood alcohol limit of 0.04 percent – half of what is permitted for regular motorists. This means that drivers need to be very aware of their blood alcohol concentration, as a single beer can propel them over the legal limit.

Beyond efforts to decrease and maintain alcohol consumption across the industry, the NHTSA is also making drug-impaired driving a top priority this year. In January, the association announced plans to launch a new initiative to raise awareness and educate the public on the potential risks of driving while on drugs. The goal is to spark a national dialog around developing stronger policies and to combat the growing epidemic of drug-impaired driving.

This effort comes at a critical time. States around the country are working to legalize marijuana for both medical and recreational use. With greater access to the substance, it’s crucial that all operators are cognizant of the powerful effects and refrain from utilizing while driving. In 2012, the U.S. Department of Transportation issued a memo stating that the use of marijuana “remained off limits for truck operators, following referendums in California and Washington that legalized marijuana outright.” As a result, any changes to the policy, including permitting the use of medical marijuana for those who have prescriptions, will need to be passed by the White House’s Office of National Drug Control Policy.

During the upcoming enforcement period — and beyond — it’s critical that the industry keeps a close eye on specific drug requirements, especially as we continue to see states lifting regulations on the use of marijuana and other substances.

While many people often associate impaired driving with drugs and alcohol, there are other factors that can affect a person’s ability to drive safely including poor health or diet, lack of sleep, medications, and stress – all of which are largely relevant for the trucking industry. Drivers need to prioritize their health and safety first, making sure to avoid sleep deprivation leading to fatigue. According to the FMCSA, 42 percent of all accidents are fatigue related, and the Governors Highway Safety Association estimates that 10-20 percent of all large truck and bus crashes involve a sleep-deprived driver.

Additionally, drivers taking prescription medications must understand the impact of taking those medications on the job. If taken incorrectly, certain medications can significantly affect a driver’s ability to operate a vehicle safely and correctly. Regardless of whether you oversee a less-than-truckload or private contract carrier fleet, educating your drivers on these risk factors and how to combat them is a must.

How to ensure sobriety

While regulations such as the ELD Mandate are helping to reduce certain risk factors, it’s evident that fleets need to ensure their drivers are prioritizing their health and wellbeing. Here are some best practices to consider:

As the trucking industry continues to facilitate better working environments for drivers and safer roadways, it’s important that all parties understand the true dangers of impaired driving.